Today as my husband and I lovingly parted ways for the day, he shared with me a dream he had about getting in an accident that seemed so real. He followed it with how many accidents there were on his commute home the previous night supposing that was why. He then got into the silver-bullet for his forty-five-mile commute down I95 to Miami.

Just yesterday at the office I named my husband and several others in a conversation stating that they may wish their commutes were less, but they take ownership of choosing where they live and the job they accepted. They do not let their feelings of what they wish for, get in the way of what it takes to excel at their jobs.  Furthermore, if they had projects throughout the State or Country, they had to attend to they would dependably and cheerfully get there.

Yesterday we had a Construction Superintendent tell us he ran the same philosophy only to waste all our time coming to an interview, forty-nine miles from his house, just to state he told us commute was not an issue, but it was. The company he interviewed with, their closest project would be 40 miles from him. The commute did not become the deal breaker in this case as lack of integrity prevailed. 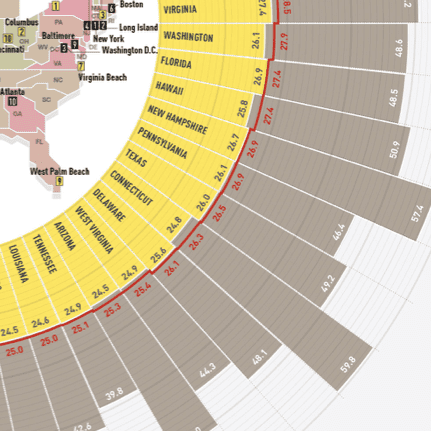 This visual map courtesy of the Visual Capitalist shows that average commutes across the country by state range from 15 to 30 minutes each way. Another site, Statistic Brain, shares with us that there are 128.3 million commuters in the US. 8% or 10,264.000 that travel 35 miles or more each way to work and 21% of them or 2,155,440 are employed in manufacturing and construction.

I ended up on the staffing side of the construction industry over twenty years ago as being a road warrior and traveling the state was not working for me after my first child was born.  It was a choice I made that has turned out to be a career I love getting to help you find the right career match.

It isn’t until the last decade that we hear much discussion regarding commute in the construction industry.  We are a whatever it takes industry, correct?  In Southeast Florida, it was pretty much a given that no matter where you lived you would most likely at some point be on a project anywhere from Miami-Dade to Palm Beach, 88 miles center to center.  That commute was usually less than an hour and a half.  The population of South Florida in 2010 was 5.5 million rising to over 6 million in 2016 and continuing to rise. The whole state of Florida only had 13.65 million people when I moved here in 1992, and we now have 21 million residents. Over 40% growth in the state.  The Builders have done well!

When it comes to the right match for you, be honest with yourself. Don’t waste your time pursuing an opportunity that you won’t be able to give 100% to dreading the drive every day.  You are only hurting your career and your employer’s business.  Employers, there are still candidates that have no issue with long commutes and use that time to listen to training webinars, audiobooks, make follow-up calls and unwind before going home to their families.

Ultimately there is not a way to interview and be 100% sure someone will be committed to a commute long run.  It is smart business practice to factor in how far someone will have to commute and for how long.  As a hiring manager, if you hire a person with a long commute be realistic and set your expectations that it could pose an issue down the road.

Many employers are now providing provision to employees commuting more than 35 miles each way to the office.  For field staff or office staff where adjusting hours or working four days a week might not be an option, typically compensation is provided.  The additional compensation is usually calculated for commutes over 30 miles each way as an incentive. If over 50 miles each way is required, often housing is provided especially when long days like a 7-6 or after, are required on site.

The commute dispute bottom line is that it falls under a behavioral characteristic.  It is all about what the individual will do because they want to so employers “Play it safe” and job Seekers “Be Real.”  If not, you could be spoiling a job opportunity future for someone that honestly doesn’t mind a long commute.

Taking our Christmas tree down this year—be…

TikTok Truth When It Comes to Your Caree...

Taking a Step Back

Sitting outside, doing some work on my laptop…

This is the time of year many of us are looki…