This week’s “quote of the week” at our company is 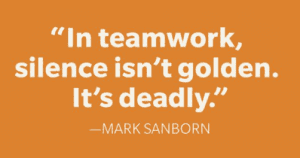 I remember when my daughters were teenagers, and they would have a discussion with my husband regarding an opinion toward action. He would listen and often not comment in the moment with his insight into their request. Too often, this led to them heading my way, starting a conversation with, “Daddy agrees with . . .” or, “Daddy is okay with me . . .” followed by whatever their opinion, need, or request might be. It could be something like, “Daddy agrees I should not have to do the extra assignment Mrs. Smith is asking from me,” or, “Daddy has no problem with me going to Orlando with my friends this weekend.”

Of course, when I ask, “Did Daddy come right out and say that?” I either get silence or a rebuttal, like, “He didn’t say I couldn’t or shouldn’t.”

Despite knowing how teenage girls can behave when they are not getting their way, my husband’s choice to not comment at all made him shine in the one-on-one moment with our daughters, yet it caused chaos, animosity, and added time and effort to move forward with the best decision for the family and circumstance.

I would be perturbed that my husband did not at least ask something to indicate his contention for the request or back our agreement to consult each other before offering an out or unvetted freedom to the young adults under our care. The girls would immediately label me the bad guy, yet with time, they realized he was no help at all but an added step to getting what they wanted (thus adding to my husband’s catchphrase that dads go from “hero to zero” during the teenage years). I now note that it is only when dads want admiration over earned respect with time. The same thing would play out if I made a quick decision on what should be a mutual decision and did not consult my husband.

With hindsight being 20/20 to all parents out there, two is better than one, with both parents agreeing when approached by a minor. Responding with something like, “I am listening, and let’s discuss together with Mom so we understand more and both agree with the plan,” would have demonstrated to our children our interest in their resolve and commitment to each other while unifying our relationship with one another.

Learning these lessons the hard way, and thankfully through our family mentors, prepared me and my husband to help others learn to take a different approach to situations for a better result. We, thankfully, choose to forgive and realign our relationship when upset, yet sadly many marriages don’t survive when one or both spouses stay silent. Silence can be deadly in relationships.

Workplace silence is as deadly as the scenario mentioned above. Executives face requests for changes in policy, special working provisions, monetary asks, and so forth. A business development person may want to deviate from the go-no-go. A construction manager might request to move forward on work without written approval to do so. A subordinate might discuss a personal need with a supervisor or another co-worker. In any of those scenarios, along with many others, if no dialogue occurs, tacit agreement may be assumed.

Why speak up? Others will ask the non-responding party why they did not say something, and that confrontation may be worse than speaking up in the first place. After all, there is an obligation in the workplace to clarify for understanding so you do not become an abettor to a situation you were avoiding. It’s no different from when an accomplice to a crime, who just sat in the car but didn’t ask where they were going before the bank was robbed, becomes an accomplice whether early reporting after the fact or not! The situation doesn’t change, only the penalty, which will not come off your record unless you attempt to expunge and not repeat.

What are three tips to help you overcome your propensity to not ask questions, not speak up, and not take time to collaborate in the workplace?

The silent accomplice to the bank robbery lives with further regret when lives are lost during the crime. The silent manager lives with regret when jobs are lost or workplace injuries happen, severely affecting individuals, families, and their own well-being.

I must agree with Mark Sanborn, speaker, coach, and author of books such as You Don’t Need a Title to Be a Leader.  Silence can be deadly.

To Choosing Dialogue over Deadly Silence,

How’s Adulting Going for You?

Thanksgiving this year, by design, was a quie…

Are You in Workplace Wishbone Mode?

I grew up a day’s drive from Plymouth Rock,…

A few years back was a particularly tough yea…

What Do You Think About Employment TRAPS...

A client of ours at FLCC suggested this blog…