“Livelihood” is the means by which someone is given to generate income to care for themselves and others under their provision.  There is a famous quote by Epictetus that says, “It is impossible for a man to learn what he thinks he already knows.”  Epictetus was a Stoic Greek philosopher whose many books on ethical advice have well known aphorisms, such as “It’s not what happens to you, but how you react to it that matters” and “Men are disturbed not by things, but the view of which they take of them.”

Most of the time at Florida Construction Connection, we work with currently employed individuals who are in the market to make a move at the right time from their current employer, due to a career or life goal they cannot achieve where they are now.  We are fortunate in that the majority of employers with whom we work plan accordingly to allow time to find the best match for them.  When both sides think through the process, more often than not everyone is happy with the result of the timing and negotiations. This is not always the case however, and sometimes we make a client introduction to an unemployed professional when planning was not an option for them.

The year 2020 has been one where forethought was not always an option for the timing of a job hunt. What has amazed us has been the individuals who gamble with their livelihoods by turning down sensible job offers instead of going back to work.  Some have held out for months on “furlough” from their employer in hopes they will receive a call back to work.  Others, even though clearly laid off, will reject a fair offer, even if with equal or better pay than what they had before their lay-off, holding out for a “perfect match” to the job they loved and lost.  Grieving the loss of a job is real.  The inability to move on in hopes that it will revive itself is like never going into a relationship again after losing your mate to death or another.  At some point, you are only hurting yourself further.  Fast Company wrote an article that helps you navigate through job loss grief.

There are twelve months in a calendar year. If you earn $75,000 per year in Florida, you take home $4,966 per month.  In New York, that would be $4,638 per month, before any additional benefit deduction.  Other states are somewhere between those figures, depending on the state tax rate.

If you earn $90,000 per year in Florida, you take home $6,138 per month.  The difference between the monthly pay of a $90,000 salary and a $75,000 salary is $1,172, which may seem like a lot, as it might be a good share of your rent or mortgage payment. Yet that is approximately the same amount as the monthly unemployment take home– so how do you know when gambling and taking an opportunity is worth it?

You have done a thorough interview process.  You know you can excel at the job and could enjoy working within the company, and with the people affiliated with that company- for either the long or short term. 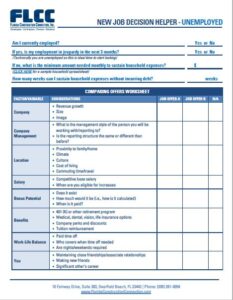 The communication between you and the person who controls your performance reviews is open, and they addressed what was different from the job you left or are leaving.  CLICK HERE for a side-by-side job match comparison worksheet, and for help with your decision-making process.

Often companies during difficult times cut their total spending by up to that number. This might include existing staff pay or benefits, and often includes the budgets they have to get someone on board at a rate they know is stable.  The worst thing that could happen to you a second time is a layoff.  An employer always knows they are gambling that you could leave if they bring you in for less pay than you were making.  If they are willing to take that chance, you should also. Especially if they put a path or bonus potential to reach the past compensation rate, or close thereto.  Being employed only makes you more marketable going forward, as your skillset is in use and you relieve the burden of having no paycheck. A new employer is going to be looking at your credentials based on the investment they need to make in you to learn their way of doing things, as that is what ultimately brings value to them for increases.

We recently had a candidate who received a significant raise from his previous employer that laid him off.  He could not see that the employer gave him that raise due to the amount of turnover on the project, and there nobody else left with history of the project. He did have the fortitude to work side-by-side the executive they sent to finish the project, but predictably, he was laid off once it was completed.  This particular individual now thinks this higher pay is his appropriate asking price, and believes his value is due to being the last man standing.  The company on the other hand sees him as the assistant that helped the executive assigned to the project get it closed out. Unfortunately, the candidate is still in love with the feeling of being paid more than he ever was previously.

What the candidate doesn’t realize is his value continues to drop every day he is on the bench.  If he is paid that same high rate, it will only be from another desperate company who will utilize him in the same manner. He will think it will be of value to let someone know he turned an offer down due to money or autonomy at any age.

Turning a fair offer down for anything other than a relocation, unrealistic commute, or something totally out of your skill match will make many, including premier future employers, contemplate how practical your thought processes and communication skills are.  The stable employers are not looking for a gambling man or women.  They would rather have a forthright communicator who says they took their current job on faith in a tough market, and although thankful for the opportunity, knows it may not be a long-term situation.

In line with Epictetus, if you think you know you are worth a certain dollar amount because you received that before, you are the only one that can either open your mind to demonstrate your ability to a new employer, or continue to sit on the bench until you get your asking price.  With an offer in hand, you can communicate and understand the cards dealt to you, and consider your next move. Playing the hand dealt to you with a new opportunity might end up being the smartest gamble you ever took.  Your new opportunity may just open the door to something even better than before.  But you won’t know if you just throw the cards back because they are not your royal flush.

Taking our Christmas tree down this year—be…

TikTok Truth When It Comes to Your Caree...

Taking a Step Back

Sitting outside, doing some work on my laptop…

This is the time of year many of us are looki…